be mindful of your shoes and mind – Haeinsa Temple Stay 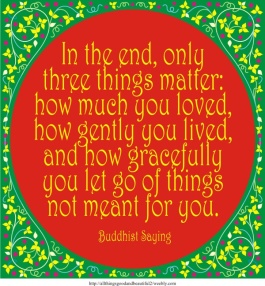 A few Saturdays ago, instead of relishing in the time that is a weekend morning without work, I struggled out of bed before 6am, threw a few random overnight necessities into a bag and headed out to find where the heck the Uijeongbu bus terminal was located… I had originally been hesitant to commit to a temple-stay weekend with friends at the end of April, not because I wasn’t eager to sleep, eat and learn at a Buddhist temple for a night, but because I had already enthusiastically scribbled over the entire weekend on my calendar: LADY GAGA WEEKEND!! I wasn’t sure if I could squeeze a megastar pop concert (the biggest show at the Olympic Seoul Stadium since MJ) and a spiritually rejuvenating temple visit into one single weekend. In the end I realized I could do both, I would have to forgo the Friday post-concert night out in Seoul to be physically able to get up and leave for the temple Saturday, but in the end it was very much worth the sacrifice.

After a 4+ hour bus ride, a subway excursion and another 1+ hour bus ride we made it to the Haeinsa Temple located in the Gaya mountains of Hapcheon-gun (county) in the southeast part of the country. The temple’s name means ‘Temple of Reflection on a Smooth Sea’, which is taken from a passage in the Avatamsaka Sutra where the wisdom of the Buddha is compared to a calm sea. When the mind — like the sea — is freed from the waves of worldly desire, it will perfectly reflect existence as it truly is.” (http://english.visitkorea.or.kr)

I had signed up for the temple-stay unaware of the significance of the Haeinsa Temple. The weekend’s plans were orchestrated by a friend and I had appreciated the calm in not having to plan any of the travel logistics. I should have asked which particular temple we were visiting, but I got caught up in my busy teaching weeks and failed to educate myself on the trip beforehand. I was pleasantly surprised to learn that Haeinsa Temple is one of Korea’s three largest Buddhist monasteries, or one of the “Three Jewels” as Korean Buddhists call them. The temple is considered a UNESCO World Heritage Site (added in 1995) because it has been home to the Tripitaka Koreana, a selection of wooden printing blocks (81,350 of them!) of 13th century Buddhist scriptures that make up the most complete and oldest edition of the Buddhist canon in Chinese characters, since 1398.

The temple was first built in 802. Legend says that two Korean monks returned from China, Suneung and Ijeong, and healed King Aejang (애장왕, 哀莊王) wife’s of her illness. In gratitude of the Buddha‘s mercy, the king ordered the construction of the temple.  Another account, by Choe Chi-Won in 900 states that Suneung and his disciple Ijeong, gained the support of a queen dowager who converted to Buddhism and then helped to finance the construction of the temple. (http://en.wikipedia.org/wiki/Haeinsa)

Haeinsa is nestled into the quiet mountainside of one of Korea’s national parks. A brief hike from the bus stop to the entrance of the temple revealed how far from the bustling streets of Seoul we really were. After checking-in with the main office we were given our temple stay uniforms and guided to our overnight room. I was exhausted from the day of traveling and the lack of sleep the night before, but I was primed – and a bit nervous – to start the stay. 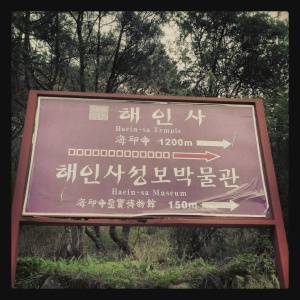 The bus dropped us off at the base of a hill in the Gaya mountains. We followed the Korean crowds up the hill to the temple. Although only a small group of us (mostly foreigners) were there for an overnight stay, I was surprised at the sea of Koreans hiking, exploring and enjoying the serenity of the temple during the day on Saturday and Sunday. 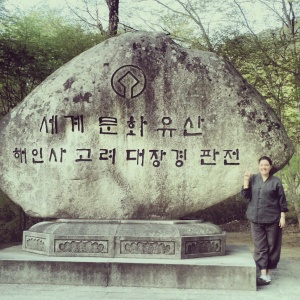 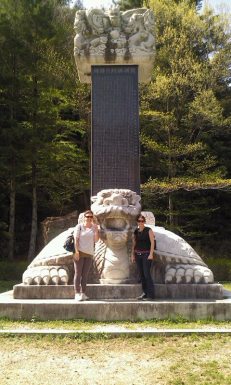 We stopped to admire many signs of Buddhist art and sculpture before even reaching the temple gates. 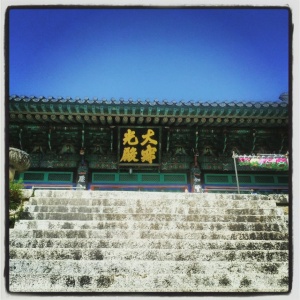 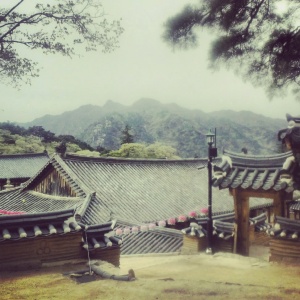 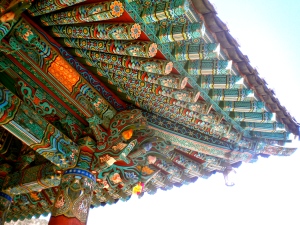 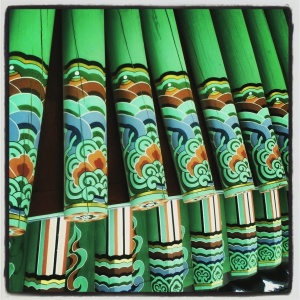 The architecture was fantastic – I am in love with the temple colors! 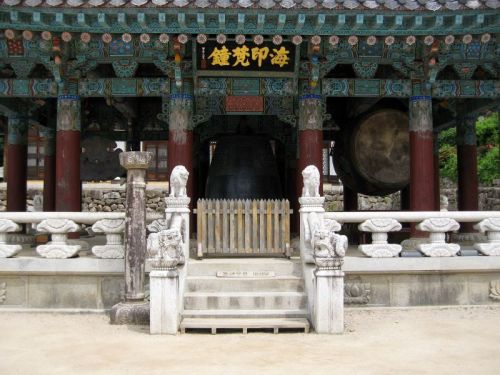 This area of the temple is home to the the Buddhist instruments that are used to announce the time for monks to practice their daily rites. The instruments include the dharma drum, the wooden fish and the large brahma bell. 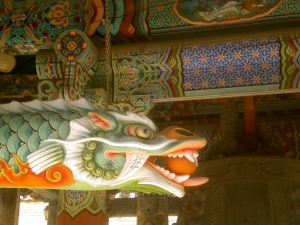 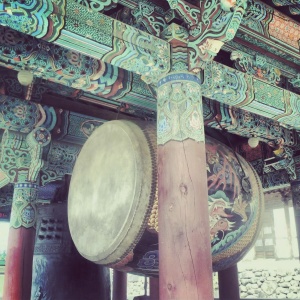 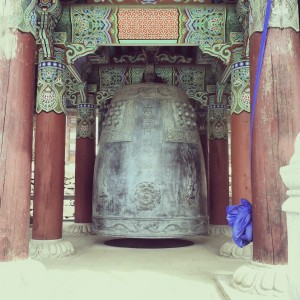 I experienced the drumming of the dharma drum once in the evening as the sun set on Saturday and also at 3:20am on Sunday when the day began for the Haeinsa Temple monks and Buddhist practitioners. The drum beats to save all beings living on earth, from humans to animals to ants, and so on. The sound of the beating drum is considered to echo the sound of Buddha’s teachings. (http://english.visitkorea.or.kr) 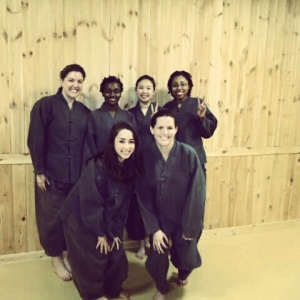 Our temple stay crew in our fashionable uniforms! They were not the least bit flattering, but they were definitely comfortable. 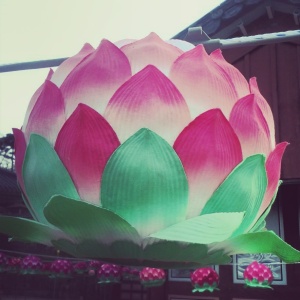 Saturday night we drank traditional tea with our guides and made our own lotus lanterns. It was a relaxing end to the day and we were surprised with a visit from a Haeinsa Temple monk who came to sit with us and answer any questions we had. His words were translated with help from our guides, and he stressed that we take what we learned in the temple home to incorporate into our daily lives as needed. It was a pleasantly relaxing activity, I loved sitting quietly among the rest of the group as we all worked creatively with our hands and listened to the monk. We all broke out in smiles and low giggles when the room was suddenly filled with song and the monk sheepishly fished out his cell phone from his pocket and excused himself from the room to take a call. 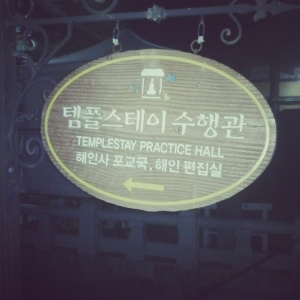 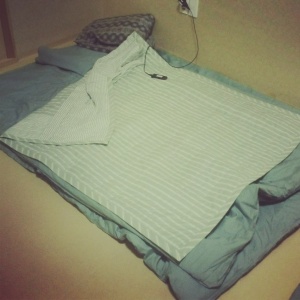 Bedtime was 9pm on Saturday night, and in my opinion it was the perfect time to head to bed. To be honest, my sleep patterns in Korea have been a bit sporadic. I teach everyday from 1-8pm, so most nights I find myself staying up very late and waking up each morning when most of my friends have already put in a solid few hours of productive work. In my 2+ months in Korea, this night was the first night I was in bed with my eyes closed before 11pm – let alone 9pm! I was exhausted and drifted off to sleep effortlessly. Although my bed consisted of only a few blankets and a small pillow on the hard floor, I was instantly comfortable. The front door of the “dorm” was open and fresh air and the sounds from a  monk-made stone waterfall lulled me to sleep…until my alarm sounded at 2:55am. 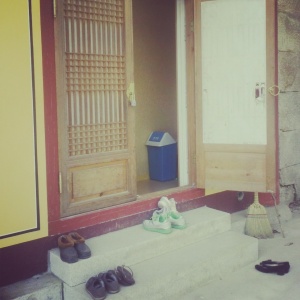 One of the teaching moments that stayed with me from the weekend was a brief explanation of the placement of your shoes from our guide. She explained: You must be mindful of your shoes and in turn the mindfulness will spread into other parts of your life. This was during our first monk/temple etiquette class as the guides were introducing themselves to us. One of them pointed to the pile of shoes at the room entrance. We had all been in a hurry to change into our uniforms and find the class meeting room. Many of us had unknowingly shuffled out of our shoes and left them scattered outside the room. The guide explained that how we arrange our shoes tells a lot about us and our state of mindfulness. After that I took the time to carefully place my shoes neatly outside each temple room we entered. 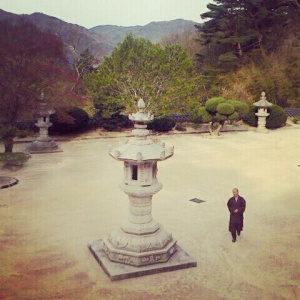 We hiked up to another small temple that is situated away from the main temple where monks can practice in complete silence. 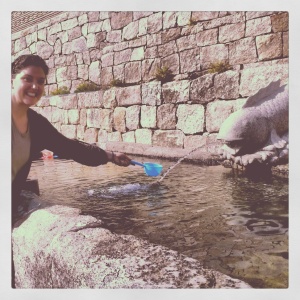 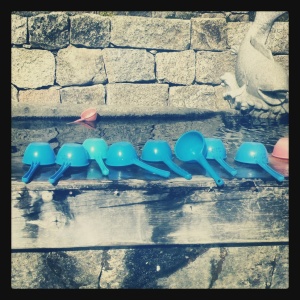 There were fountains sprinkled all over the temple grounds where people used plastic scoops to drink the water. I simply followed. 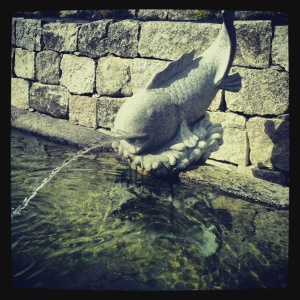 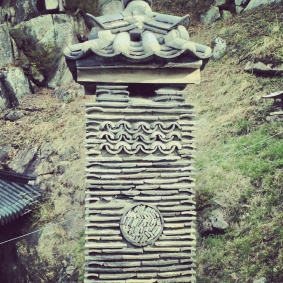 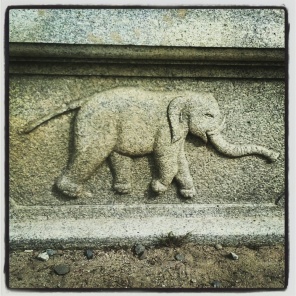 There were so many tiny spots of art that you could easily miss while trying to take it all in. The attention to detail is amazing! 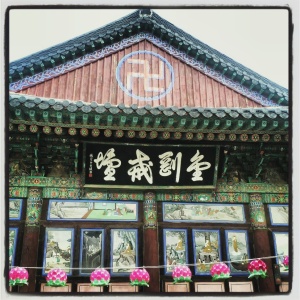 I am most familiar with the Nazi use of the swastika and I was unaware that it was first used in ancient civilizations around the world. Today it is still used in religions including Hinduism, Buddhism and Jainism. The symbol is meant to evolve ‘shakti’ or the sacred symbol of auspiciousness. The swastika is also a Chinese character that is used in East Asia to represent eternity and Buddhism. 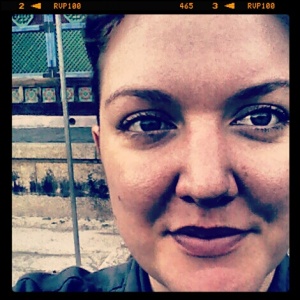 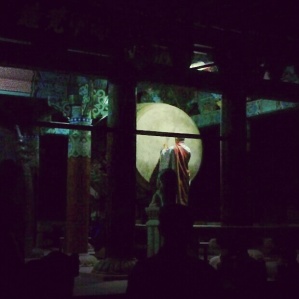 It doesn’t matter how much sleep you get, 3am is rough if you are not used to it. The early wake-up was a bit difficult and I snapped a picture of myself to document my earliest wake-up in Korea thus-far. We soon realized it was worth it to experience the first dharma drumming of the day.

Although this is only a taste of my stay, it was a stunning weekend and I returned to Uijeongbu on Sunday night physically exhausted but mentally refreshed and looking forward to my next temple stay. Not all temples are the same, so I am intrigued to see what the next one will reveal.