from an accident in africa to ankle acupuncture in korea

It seems only fitting that the ankle I broke in Africa would finally find comfort in my next home away from home – Korea. The last time I was abroad I comically fractured my right ankle during my medical orientation (at a hospital!) in Kenya. The break made for quite an experience and a tearful/choked up call home to my mom after a panicked evening in a Nairobi hospital. I was put in a cast and advised by my parents to seek surgical consultation when I returned to the states 5 months later in December.  I was studying abroad with 16 other students in the St. Lawrence University Kenya Semester Program. This injury sidelined me a bit from the Kenya experience, but a few weeks later I managed to haul my walking cast clumsily down a muddy dirt lane to my rural home-stay in Kenya’s Kericho Valley. I abandoned my crutches a few days early and assured the abroad program directors that I would be fine for the week in the middle of nowhere with a few bottles of water, little knowledge of the Swahili language and a farming family that would not stop staring at the plastic portion of my leg. 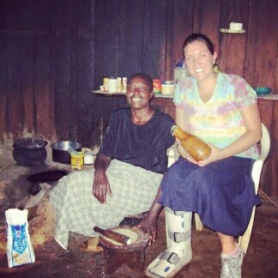 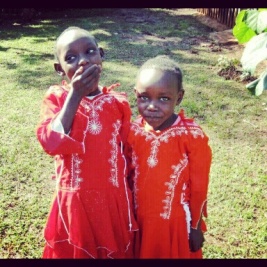 The week was a memorable one and my host family was understanding and very welcoming. I am glad I ditched the crutches and participated the best I could. The remainder of the semester was amazing, my cast eventually came off, although my ankle continued to bother me but I kept that fact to myself. I wanted to be a part of the group again and I carefully maneuvered my ankle through the savanna, in and out of the safari jeeps, down the busy streets of Nairobi and Mombasa and (my favorite) around the tiny Maasai tent that my friend and I shared with a family of goats one night. When I returned home months later my mom was lucky to know someone who helped to set up a consultation with a well-known surgeon. I had surgery and was again exiled to the couch and then weeks later graduated to crutches. I can not begin to tell you how much fun crutches are during the first few weeks of your senior spring semester in the icy North Country that is Canton, NY. But enough about that… My ankle healed somewhat and I returned to my regular routine, although I remained weary of my ankle when I was running or playing sports. From time to time it has bothered me after excessive use, when wearing heals or in the morning before walking around on it for some time. I put off visiting a doctor in the US before coming to Korea – not my smartest decision – but oh well.

A few weeks ago my friend mentioned she is in love with her new acupuncture routine. I immediately was curious and she agreed to take me to her next visit. I wasn’t sure if Korean acupuncture would be a good fit for my ankle pain, but I was willing to try anything. (Acupuncture is an alternative medicine methodology originating in ancient China that treats patients by manipulating thin, solid needles that have been inserted into acupuncture points in the skin. According to Traditional Chinese medicine, stimulating these points can correct imbalances in the flow of qi through channels known as meridians. -Wikipedia) I met my friend later that week in front of the oriental clinic – only a 5 minute bus ride from my apartment. I assumed she had an appointment, but she confessed she just showed up to the clinic when she could fit it into her schedule. What!?? I followed her up the stairs in a baffled state. Countless times I have tried to make appointments with specialists in the US and their receptionists politely suggested a consultation date 3 months into the future and a mandatory referral from my PCP. How could my friend just walk in and be seen by the doctor? We walked into the clinic and my friend was immediately greeted by the woman at the front desk with a warm hello. I told my friend she could go ahead to her appointment and I would wait to see if the doctor could fit me in later, but the front desk attendant simply asked for my ARC (my identification card with my address and information in Korean) and she filled out a new patient form for me and told both of us to take a seat.

Less than a minute later the doctor came out of his office and ushered us both in together. He checked in with my friend regarding her acupuncture care and then talked to me about my ankle. Luckily he spoke good English and my friend, who speaks a little Korean, also helped to facilitate the conversation. A few minutes later we were taken into the treatment room, a large open room full of beds that are sectioned apart by curtains. My friend and I were placed in beds a few feet from each other and the doctor immediately began placing the needles for acupuncture on both of us. Koreans do not like to wait – I do not know how they would survive in any US doctor’s office.

going-to-the-doctor *PLEASE check this out for a laugh*

The acupuncture lasted for 25 minutes or so. I was able to lay back and relax in the quiet room while the needles did their work on my ankle. The doctor explained that acupuncture would help get the blood moving around my ankle ligaments and help rid the area of any scar tissue that causes discomfort. The needles were painlessly placed and removed and the acupuncture was followed by some sort of medical massage. The nurse placed several suction cups to my ankle. These long octopus legs were attached to a large humming machine near my bed. The cups worked to mechanically massage my ankle sending strong pulsating pressure into the ligaments. After another 20 minutes or so of this wonderful massage I was led to another bed and the nurse pointed for me to lie down. She smiled, closed the curtain surrounding the bed, and walked away. I wasn’t sure what to expect, maybe the doctor would come examine my ankle now? All of a sudden I was attacked from underneath the bed. It felt like a handful of children were crouched under the bed hitting upwards through the mattress. The punches raced up and down my body and around in a circular pattern. I realized this must be an all-over body massage/exercise. After the initial shock of the treatment, I began to enjoy it. The jolting massage sort of helped to balance out my body in a way – bringing it back to equilibrium after the ankle work. After the massage I saw the doctor again and he told me to come back in a few days. No appointment card, no lecture about faxing a referral from my PCP to his office, no mention of even needing my insurance information, and he didn’t even rush me out of his office – WHAT!? The real shock came at the front desk when the woman pointed to the payment screen. My specialist consultation, the  1+ hour of acupuncture and other treatments cost less than a Starbucks venti latte with an extra shot of espresso. 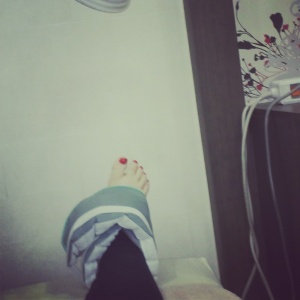 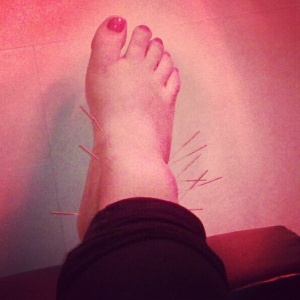 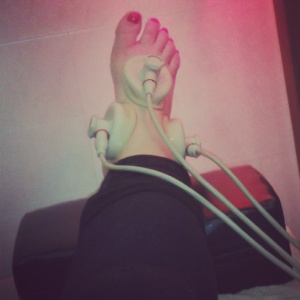 I have been back twice since my initial visit, and I know that it will take time for my ankle to fully heal, but I have noticed some improvements. My ankle feels less stiff each morning and I haven’t had any sharp pains in a few weeks. I have yet to start running again, but I hope to run a race in Korea before I leave (bucketlist – 10k or half?). I have also noticed improvements in my hot yoga practice. There are a few poses I was unable to do before, and now I can move into the poses a bit deeper, I am not completely there, but I will be!

I know there are a few things I need to take advantage of in Korea – the authentic Korean BBQ with real burning coals, sleeping in each morning before going to work at 1pm, the fantastic public transportation, and now my acupuncture doctor and his fantastic staff and clinic.